This is a Rogue-like, Zork-like, text-based adventure game.  You are a brave adventurer exploring the world using simple text commands.  You don't have to type, but you can if you want.

There are continuing chapters in development.

Feedback is encouraged as well as anyone would like to participate in development should contact us so we can give you access to the custom game editor.

If you like Swords, you may find this interesting ...

Sleepless Games now hosts a Discord server where we do our development. We're building a new game that should be done around 31-Jan-2020. If you want to watch it be created, come and hang out with us!  You can ask questions, etc.   Here's the Discord invite link  -- https://discord.gg/mNPBJGt

So my name is Joe Hitchens.  I create the Swords game.  I will try to answer a few of your questions about it.

"Angry Dragon" is indeed the first of what I'm calling "chapters" in a hopefully longer saga.  "Bog Beast" is the second chapter.  Those are the only two so far.

Yes, there are other modules in the list, and yes, they're really just test modules.  And yes, I should make them invisible to avoid confusion.  I'll do that.

Regarding the idea of carrying loot and attributes across the chapters.  There are a lot of issues with this, but I do intend to have "something" carry across the chapters to tie them together.  But it may be limited.  I also have to figure out how to do it as I'd like to let the player go back through previously played chapters (for top secret reasons).  So that's something I have to work out.

My intent was to make each chapter rather small, and short; Something you could play within the space of 30 to 60 minutes ... just a little fun thing to do when you're bored.  It would be an epic story/adventure, but it would be broken up into many very small chunks of game play and not heavily dependent on each other.

Regarding voice/sounds: The voice option enables the speaking of the output for you.  It does not allow you to speak the commands.  HOWEVER!  There is an Alexa version of this game that does!  The Alexa version was actually created first and includes only "Angry Dragon".  If you have an Alexa say, "Alexa, open the Swords game" and you should be able to play it with your voice.  The web based version is unlikely to have voice input anytime soon though.

Regarding iOS Safari, I didn't test that, so I don't know how well it will work.  In fact, it's only been tested in Chrome on a Mac.  It "should" work in any desktop version of Chrome or Firefox.  It might work in other desktop browsers or in in browsers on mobile devices, but can't guarantee it.

Regarding commands.  You can type in the full verbs like "inventory", but there are some common abbreviations that work, but not all the verbs have abbreviations.  "I" for inventory should work, as well as N, S, E, W.  I think "x" is short for "study" (examine).  Perhaps "t" for take.  The abbreviations are all one letter, so just try them out until I can include the list in the instructions.  You can shorten the noun to just the general portion in most cases, if it wouldn't be ambiguous.  For example, if there is a red potion in your inventory and no other potions, you can enter "quaff potion"  and leave off the "red".

I believe you can "study" bad guys without them attacking you.

You do currently lose your loot when you play a new chapter, but again (as above) I hope to have at least sort of carry-over.  One of the main issues is that in order to carry items across chapters, those items would have to balanced in terms of game play across the whole saga.  For example, a magic sword that is crazy powerful works okay in Angry Dragon, but if I carry that over to the next chapter then does that make me super-powerful and able to murder everything in sight right from the start?  Or do I somehow increase the power of all the creatures on subsequent chapters to take that into account?  What if the player doesn't happen to have found that sword in the first chapter?  Then they'd be way too weak.  So, although I want some continuity across chapters, I still want to preserve the ability to have each chapter be a very small, self-contained little adventure unto itself.  It's a work in progress.  Ideas are welcome.

Yeah, it just keeps saying Game Over at the end.  All you can do is Reset or New Game.  It's lame.  I'll try to improve on the UI there.

Hope that answers some questions.

I purposely wanted the game playable with your eyes shut (if you're sighted), hence the abbreviations and the voice.  I did this mainly because I wanted the player to user their imagination rather than include graphics in the game.  It's sort of as an experiment.  It actually didn't occur to me that it would be a good game for unsighted folks, but I'm glad it is, and would like to do what I can to make it as accessible as possible, so please give me pointers on how I can do that better.

I appreciate you all having a look and asking questions.  I may not be able to check this forum often.  A more direct channel to me would be to email swords@sleepless.com or contact@sleepless.com.  Please don't hesitate to give me feedback and suggestions.

this is Dark from audiogames.net. Loving the game, and you'd be most welcome on the forum.

then your account will be unrestricted and you can post anywhere. This is an antispam measure, since we were getting a lot of spambot registrations and most automated antispam measures aren't friendly to screen reading programs.

I found a discussion about the game (https://forum.audiogames.net/topic/29934/an-accessible-browser-roguelike-swords-by-sleepless-inc/) but was unable to reply to the comments and questions there as I didn't have posting/replying privileges after registering.  If you would like to have your questions answered or would like to provide your feedback here, I'd be delighted to respond!

There is now a new chapter/world called Bog Beast that is free to play.  Check it out!

the accuracy while fighting is horrible, I just kept missing, could you fix it please?

Yeah, the melee isn't that great yet.  Getting a potion that increases your agility will probably make it so you hit a lot more often.  I'll see what I can do to make it less lame.

Anything else you like/dislike?

Fighting/melee has been improved a lot now.

Great!  Thanks for the input.  If you have any other suggestions please pass them on.  And thanks for playing.

Have you played the 2nd chapter "Bog Beast" yet? 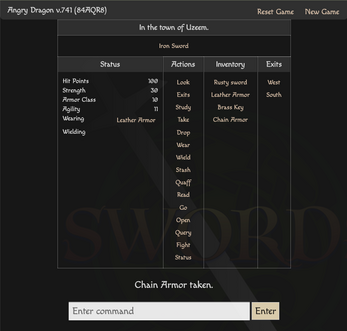